Saying No: A Case Study 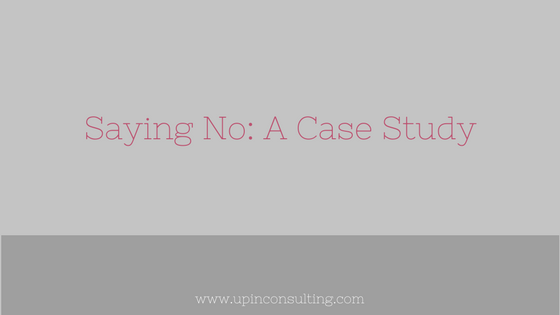 Have you ever been in a situation where you fully intend to say no to a request, but your guilt gets the best of you? Then, before you know it, you’ve taken on an additional commitment that is more time consuming and frustrating than you ever would have imagined.

This is a problem that plagues many of us. In fact, I have a client who used to say yes to everything. She’d take on extra courses and volunteer for committees with only the slightest prodding from colleagues. As she said yes to so many requests, she ended up saying no to her writing. Her blocks of writing time would shrink, deadlines became suggestions, and when she did write, it was hard for her to find a groove because she’d neglected her writing for so long.

The neglect creates a vicious cycle. The longer you are away from your writing, the harder it is to get back into writing. Once you struggle with writing, it becomes less enjoyable. Since you no longer enjoy your writing as much, you rarely look forward to writing time. Consciously or subconsciously, you seek out ways to avoid your writing.

My client knew that avoiding her writing would not serve her well in the long term. Tenure was looming, and she wanted to raise her national profile as an expert in her field. She needed to make her way back to writing, but she wasn’t sure how.

We worked together to establish a daily writing practice where she wrote for a short period of time every day. Once she had a habit of writing, she felt way less intimidated by the prospect of writing. Just as importantly, she began to make progress. Satisfied with that progress, she began to protect her writing time. She scheduled her writing time (rather than just waiting for free time to materialize) and wrote for longer stretches of time. Now, she is the master of no. She says no to requests that can disrupt her research agenda in ways that she has not already accounted for. Now, this does not mean she refuses everything. Instead, she is much more resistant to taking on responsibilities that most of us feel pressured to accept in the name of being a “team player.”

There are a few lessons we can take away from this example:

Saying no is like building a muscle. It’s hard, but with practice, your ability to say no grows stronger. There is no rule for how long it should take, but it rarely happens overnight.

Nobody is going to protect your writing time but you. That’s why it’s vital for you to remain vigilant, and always weigh the repercussions of accepting responsibilities that may cut into your writing time. To be clear, not all responsibilities are burdens. Even so, the reality of academic careers is that you’re required to publish, and nobody can make that happen but you.

Simple Productivity Is Open for Enrollment