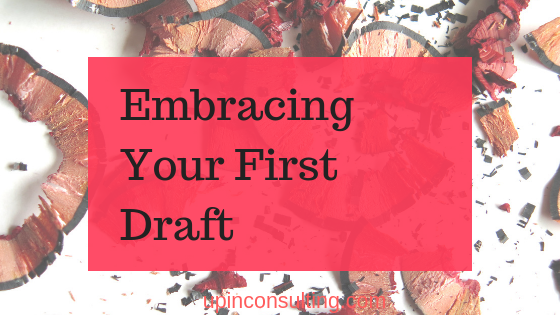 Some time ago, I posted some Twitter encouragement for writing shitty first drafts. The response was, well, surprising. 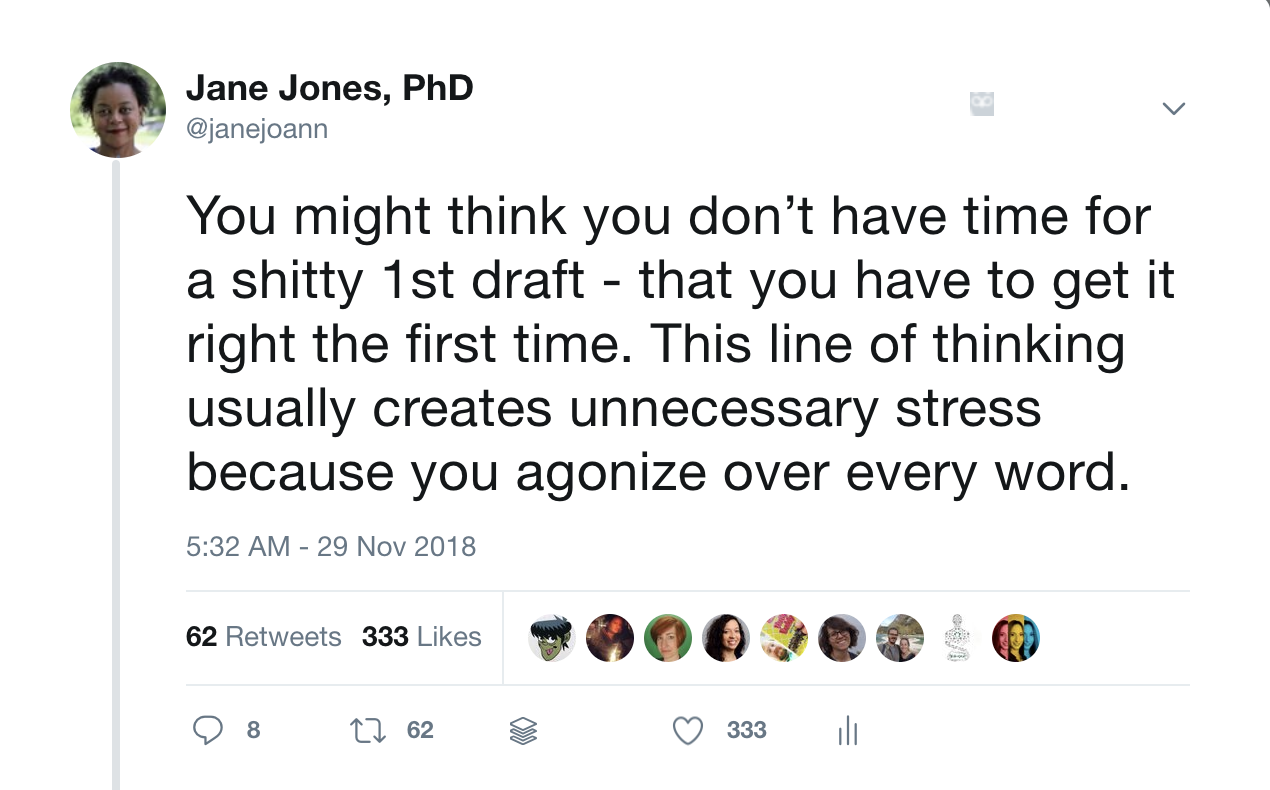 I didn’t expect it to resonate quite as strongly as it did. I believed everyone had read Anne Lamott and knew the importance of shitty first drafts. But perhaps they believed that shitty first drafts were the indulgence of creative writers and had no place in the rigorous world of academia (insert sarcasm)?

I work with a lot of early career researchers who are incredibly hostile towards writing a shitty first draft. Here are some of their reasons.

A shitty first draft is a bad use of my time.

Many writers reason that they don’t have time to write multiple drafts. What is the assumption behind this claim? That they’ll get it right the first time? When in the history of writing has that happened?

Although writers rarely get it right on the first try, the pressures of the modern academy are such that writers believe there is no time to work on multiple drafts. In their quest to be more efficient, writers are uncertain about the value of writing the first draft.

Good writers only write once.

Contrary to the beliefs of first draft naysayers, revisions are inevitable. Many writers, however, struggle with writing something they perceive as bad. It seems like a failure to put words on the page that will later be deleted or moved around. Think about it: how many times have you had an idea in your head and dismissed it before your fingers even hit the keyboard? How many times has the fear of reading what you perceive as bad writing kept you from writing altogether?

Why are people so committed to these beliefs? I have some ideas.

First of all, I don’t think that it’s the time commitment that’s stopping you from writing a shitty first draft. It’s your mindset.

You might believe a shitty first draft is beneath you. After all, you know what you’re talking about. You spent days and days outlining, and now you’re ready to write a draft that will be quite good, thank you very much. According to this line of thinking, shitty first drafts are for amateurs.

Conversely, you might believe a shitty first draft will expose you – it will be visual evidence that you actually don’t know what the hell you’re talking about. You don’t want that proof. That’s why you immediately start revising – because you can’t even bear to see that ignorance on your computer screen – right?

How to write your first draft.

What if we all just acknowledged that bad writing is inevitable? If we start there, then we can avoid value judgments about writing quality and whether people are naturally gifted writers, etc.

What if we also acknowledged that writing can be uncomfortable and that we should write anyway. If you’re avoiding the shitty first draft because you think it will cause you discomfort, I have some unfortunate news for you – writing is uncomfortable. You’re working with complicated ideas and trying to distill years of work and enormous bodies of literature into a few pages or even paragraphs.

I like to think of early drafts as piles of clay. When you start making a pot or a vase or what have you, you just have a piece of clay. It has no shape. Then, little by little, you begin shaping it. You rarely complete that process in a single sitting. It’s the same with writing. Your early attempts will be unformed, but with each round of revision, your writing will become sharper and more refined. It’s just a matter of time.

I believe that with writing – as with many things in life – you increase your chances of success when you give yourself multiple opportunities to get something right. So think of each draft as another opportunity to get it right.

If you’d like to write the first draft of an article using a proven system with structured support, then please check out my course The Art of the Article. It’s a 10-step program that takes you through each step of the article writing process, from selecting a journal to completing a draft of your article that’s ready for feedback. If you’d like to learn more, click here.

How Long Does It Take to Write an Academic Book?