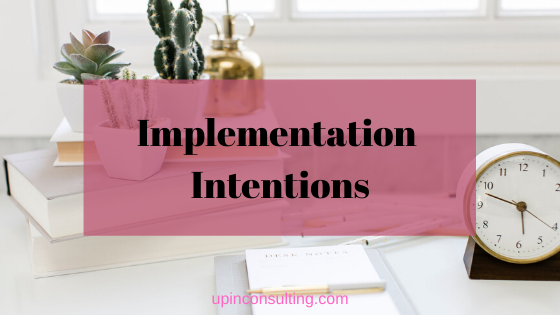 How do you make sure that you follow through on your plans? One strategy I talk about often is breaking down big goals into their easiest first steps as a way to maintain momentum. In this blog post, based on a video coaching session I recently conducted, I’m going to focus on one specific technique for building habits. This technique is called an implementation intention. Now, this is a concept that I was first introduced to in James Clears’ book Atomic Habits. His book is a review of the research on productivity, time management, and habit formation. The implementation intention is a concept developed by other researchers that Clear then explains in his book, and I’m going to explain some of it to you today.

An implementation intention is a plan you make beforehand about when and where to act. Suppose you have a goal along the lines of writing more in 2020 or writing two articles this semester. An implementation intention would include one action you’ll take to achieve the goal, and a queue for the action. Here’s an example: I’m going to write at the kitchen table for 30 minutes every morning at nine o’clock. Or it can be more detailed: I’m going to make myself a cup of coffee, open my purple notebook, and write for thirty minutes at nine o’clock every weekday morning. You’re giving yourself a cue — which is sitting at the table or brewing your coffee — that reminds you to act, thus reinforcing your commitment to writing. You might think of this as establishing a ritual. One reason it’s effective is because you’re making a declaration. A second reason it’s effective is because it gives you a really clear plan. Instead of thinking, “I’ll write tomorrow,” you know that you’ll work at a specific place and time. Having something like an implementation intention gives you a very clear path for how to achieve a goal. Remember this: vague tasks are left unfinished.

Another benefit of this technique is that you can make it as easy as you’d like. You know, I wake up, I go to the table and I start writing. Or, when I close my office door, it’s time to write. The closing of the door is the cue (although try convincing your colleagues, but I digress). This is writing time. Then when I go to open it, that means my writing time is over.

It’s also easy because you can use the same intention over and over. In fact, as we know, establishing habits is about repetition. It’s about routine. It’s about making the intention predictable and obvious that eventually you don’t have to think about it anymore. It’s just what you do. When it’s time to write in your office, you close your door. When you make a cup of coffee in the morning, you sit down to write. There’s very little thinking involved, so you can devote your intellectual energy to the act of writing.

And I think that with most discussions about productivity, or forming habits, repetition is really important. We’re often trying to reinvent the wheel, when what we really need to do is just keep doing what we’re doing. Even if it’s not working for us at first, because it takes time to build a habit and it takes time to get used to doing something new. So even if it feels uncomfortable in the beginning, where you feel like you’re trying and it’s not going as well as you thought it would, keep going.  You might just be off to what you think is a slow start, but it’s actually quite normal.

When you set up an implementation intention like this, try it for a minimum of two weeks to see how it works for you. Document your progress. Some questions you can ask yourself:

As you create these implementation intentions, think about what else is happening around you, so you can really support yourself when you make the intention. Create an environment in which the intention will actually be successful for you. So, I would challenge you now to share in the comments or write down for yourself two implementation intentions you can try relatively soon, within the next couple of days. Choose intentions that support one of your larger goals for this semester and start trying them out. Don’t make it hard. In fact, you should make it easy, because then you’ll have a better chance of sticking to it.

The Differences Between Academic Articles and Book Chapters

The Difference Between Dissertations And Books