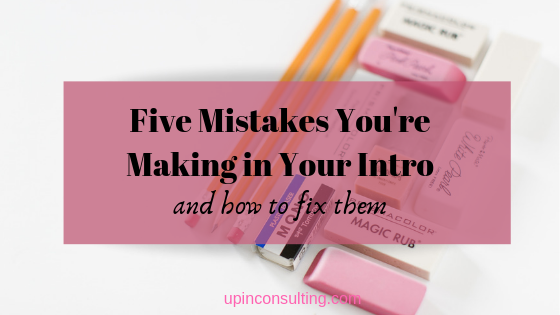 Writing an introduction well is one of the most important skills an academic writer can have. Most academic readers have a limited amount of time to consume a wealth of information. In order to make it through vast amounts of literature, they skim. This matters to you as an academic writer because you must write in a way that makes it worthwhile for the reader to pay attention to your work. When readers skim, one of the main sections of an article they focus on is the introduction. Thus, your introduction should be compelling and informative, so the reader has a reason to keep reading. Yet, many introductions are riddled with similar errors.

Below, in no particular order, I discuss the five mistakes that are commonly made when writing an introduction. I also provide examples of strong introductions to show you how to avoid these missteps.

I don’t just mean that you use the passive voice. Instead, I mean the types of verbs that underwhelm your reader, undersell your contribution, and undermine your attempts to command authority. Here is a list of commonly used verbs with suggestions for more active verbs:

In addition to using passive verbs, you might be writing in a way that signals a lack of confidence. For instance, phrases like “I attempt,” “I try to,” or “I suggest” signal that you aren’t sure about your approach or findings.

The next four mistakes that scholars make when writing an introduction have one thing in common: they all distract the reader from your main point. A wise person once told me every introduction needs a “hook.” Like a good song, an introduction should have an element that invites the reader to pay attention. It’s not merely the thesis; it’s the reason why people should read your article. To extend the hook metaphor in a different way: it should catch the reader and draw her in (can you tell I enjoy this hook metaphor?). The four common errors below all conspire to prevent you from developing a compelling hook.

The issue many writers face when writing an introduction is that they’re too subtle. They don’t get to the hook quickly enough. Your introduction is not a time to build suspense. As I’ve mentioned before, your journal article is not a suspense novel. Just state your findings. You generally have 3-5 paragraphs to convince a reader to keep reading. If your introduction is longer than this, you have too much going on. The introduction is a place where you must be ruthless – every word has to count. In the following passage, the authors very clearly state their findings (using active verbs!) which I have highlighted in bold:

This study investigates if low-income workers who were involuntarily removed from their homes—by eviction, landlord foreclosure, or housing condemnation—subsequently experienced an involuntary dismissal from their jobs. Applying matching techniques as well as discrete hazard models to novel survey data of low-income Milwaukee renters, we find forced removal to be a strong and robust predictor of job loss. Matching models show the likelihood of experiencing job loss to be between 11 and 22 percentage points higher for workers who experienced a preceding forced move. By showing that housing loss substantially increases the likelihood of job loss, this study identifies housing insecurity as an important source of employment insecurity among low-income workers. It is the first study to do so and is among the first efforts to document the effects of forced removal.[i]

Don’t get caught up in overthinking how to present your findings. Just write them out, as the authors in this article do. In two sentences, the reader is told exactly what the findings are.

There’s Too Much Background Literature

Practice this: when writing your introduction (or at least the early draft) don’t mention anyone else’s work. Can you do it? I’m not suggesting you leave your introduction this way for the final draft. Instead, this exercise will help you to explain how your work stands on its own. The introduction is the highlight reel, not the place to delve into the history of your topic.  The background literature should be saved for the section directly after the introduction.

You Don’t Tell the Reader Why Your Research Matters

You can state your thesis and wow the reader with your snazzy methods, but if you don’t explain why a reader should care, she won’t. Remember this: nobody is as excited about your research as you are. So you have to give them a reason to be excited. There are a couple of ways to achieve this, which are not mutually exclusive. You can explain the general implications of your work, which tell us how people think about a concept, how policy is created, or how a phenomenon is reproduced (like inequality). Or, you can explain how you contribute to a certain body of literature.

In short, what genomic research can or cannot tell us about race is not simply a technical
question of interest to a few scholars. Instead, it is at the heart of a much broader
controversy about the place of race, particularly in American society, and the policies we
should or should not adopt in the face of enduring inequalities.[i]

These are the final sentences of the introduction in an article on genomics and the social construction of race. The author does a few things to demonstrate the importance of her work. First, she argues that the significance is broad – not just “a technical question of interest to a few scholars.” But why is it broad? It’s broad because it is the center of a question that matters for American society – the place of race. Finally, she shows the implications – this research can influence the type of policies we adopt. All in two sentences!

Another way to prove the importance of your research is to demonstrate your contribution to a body of literature, as in the example below:

Social networks play a major role in contributing to racial disparities that exist in jobs and labor markets. Many researchers have shown that social networks are racialized in ways that advantage whites while excluding blacks from key ties that could lead to information about and access to jobs [3,4]. These findings support the generally held contention that social networks tend to be intra-racial, with whites acting (often unintentionally) to reserve opportunities for other whites. Yet much less is known about the ways that workers develop interracial social ties once they are in particular jobs, and the ways that these networks can have an impact.

In this paper, I contribute to the existing literature by drawing attention to the processes and pathways by which interracial social ties emerge after employment. Focusing on a sample of nearly fifty black men employed in professional, white male-dominated settings, I examine the ways that these men establish social networks with white male and female colleagues. I argue in this paper that gender and race inform black men‘s sense of their positionality in these occupations, and influence both how they construct networks with white men and the ways they evaluate their social ties with white men relative to their white male and female colleagues. [i]

Here, the author briefly but elegantly offers a summation of the current literature, then pivots to explain how her contribution will build on the existing literature but also fill a gap. She very clearly demonstrates in the last two sentences in this passage that her work is not merely a replication of existing research, but instead a distinctive finding.

You Give No Indication of How the Article is Organized

Your reader needs a map, albeit a brief one. Explain your methodology, and what literatures you will engage. Give a hint of what you’ll discuss in the discussion and conclusion. The passage below is like a step-by-step guide for how the article will unfold:

I begin by discussing the multiple dimensions of race and which ones may be more theoretically appropriate for examining which social outcomes. Next, I review literature that identifies inconsistencies between different dimensions and factors associated with those inconsistencies. This includes both statistical studies that include different race measures and the growing literature on multiracial people, which has advanced our theoretical understanding of how individuals can experience different dimensions of race. Finally, I map the relationship between this body of scholarship and related literatures of racial fluidity and racial boundary change, and identify additional avenues that would advance this scholarship further.[ii]

Tell the reader what is going to happen in the article, in the order in which it will happen. Above is an excerpt of an article that is a review of the literature on the multiple dimensions of race. The author clearly states what she intends to discuss, using signposts such as “I begin,” “next,” and “finally.”It’s a very simple way to direct the reader by letting her know what to expect.

The mistakes listed above are easy to make – but luckily not that difficult to correct. Remember, writing an introduction doesn’t have to be hard! If you remain mindful of your writing and revise consistently, you’ll be able to identify your errors and fix them without much trouble.

There’s way more to successfully writing an article than perfecting your introduction. If you’d like consistent, structured support for article writing, consider my course The Art of the Article. It’s a step-by-step guide for writing a revision-ready first draft. You can start the first Monday of the month. Check it out here.

[i] Morning, Ann. 2014. “Does Genomics Challenge the Social Construction of Race?” Sociological Theory. 32:189