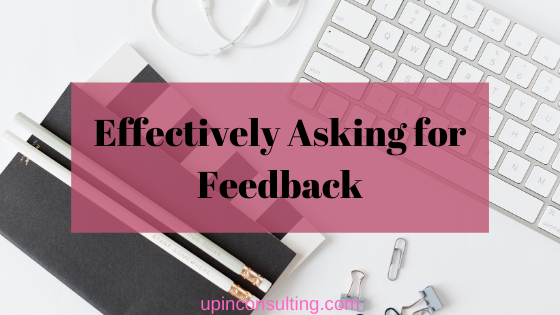 Do you struggle with asking for feedback on your writing from your peers and mentors? Writers often seek my support for developmental editing because they’re scared to ask for feedback from scholars in their field. In my conversations with clients, I’ve discovered there are four reasons writers hesitate in asking for feedback.

I don’t want to be a bother.

You might believe that you’re being bothersome or annoying by asking for feedback. Most scholars are incredibly busy, and you’re being considerate by acknowledging that. Even so, rigorous scholarship can only be created through an iterative process of feedback and revision.  I think a lot of graduate students and junior faculty hear the (legitimate) complaints scholars have about the peer-review process and internalize them. They believe that asking for feedback is somehow exploitative or intrusive. You, my dear friend, are not a publishing company generating millions of dollars of revenue off the uncompensated labor of academics. You’re not the reason academics are overworked.

Stop making assumptions about how other people want to spend their time. Whenever writers I work with express doubt about asking for feedback, I ask them how they’d respond to a request for feedback. Most say they’d be happy to give feedback, and share instances when they have. I’m sure you’ve also provided feedback to colleagues, friends, and mentees. If so, why do you assume that you have more free time than your peers? Do you think your peers are less generous than you?

There’s an entire conversation to be had about cultural and social capital in academia. Here, I’ll just say that fear of being bothersome is most pronounced among members of marginalized groups.  Almost all of my clients are women, the majority being women of color. They reject the mere suggestion that they might deserve feedback on their work. If you share this belief, listen to me: Steve down the hall is asking for feedback because he believes he’s entitled to it. You should ask too.

The feedback won’t be constructive.

Some writers object to asking for feedback because they’re worried the feedback won’t be helpful. They’re fearful it will be a waste of their time to wait for feedback that ultimately won’t make a difference. Feedback becomes a risk they’re not willing to take.

If you share this objection, consider this: you control who you ask. If you’re asking scholars you respect, why wouldn’t the feedback be constructive? You’re not actively searching for the worst version of Reviewer 2 to tear your manuscript to shreds, or tell you to explore avenues that are beyond the scope of your research, are you?

If you have either or both of the two objections I describe above, think of it this way: If you’re a kind, generous scholar then I’m going to guess that you have some friends who are also kind, generous scholars. If you’re a jerk who consistently refuses to read your peers’ work but on the rare occasions that you do, you’re unnecessarily cruel well… good luck getting feedback.

They’ll tell me my writing is terrible.

You’re thinking to yourself, “who would want to read this sh*t.” You’re worried that once someone reads your work, you’ll be exposed as a fraud or impostor. Instead of sharing your work, you keep it hidden. You rarely submit for conferences. Publishing seems like an impossible feat because you can’t even imagine a friend commenting on your writing.

If your writing is indeed “terrible,” then you likely need help improving it. That’s the purpose of asking for feedback. This is also why it’s so important to cultivate a community of sympathetic, supportive peers, colleagues, and mentors to read your work — or to work with an editor. These are the readers who will give you objective feedback without being cruel. Some of it might be tough to read, but it won’t be unnecessarily mean.

I want to wait until it’s more polished.

Again, the point of feedback is to improve your work. This is really just an excuse to hold onto your work for longer than necessary. If your work is complete, there’s no reason to seek feedback. There’s really no point at which you’ll look at your work and definitively say, “this is the best moment to ask for feedback.” That’s because most of us don’t write in a linear fashion. For instance, you might have a really strong discussion section but an introduction that still needs improvement. Our drafts are uneven because they’re drafts.

If your draft is uneven, give your reader some guidance on where to focus their attention. It’s reasonable to tell your reviewer, “I think the discussion section is strong (so feel free to skim there), but I think the introduction has X, Y, and Z weaknesses. I’d really appreciate your feedback there.” If you don’t know the weaknesses but feel that something’s off, just say, “I’ve hit a wall here and would appreciate any guidance you can provide.” As long as you lead with gratitude rather than bossiness, it’s OK to be specific in your request.

This type of targeted request has two clear benefits. First, it saves your reader time (so you’re less of a bother!). You’re telling them where to focus their energies so they can get right to work. Busy people appreciate this. Second, it gives you a better chance of receiving useful feedback (alleviating your fear that the feedback will be unhelpful).

All of the objections I’ve discussed are completely normal. You’ve likely had one or all of them yourself. Putting your work out for critique is scary. The important action for you to take is to acknowledge the fear and share your work anyway. That’s the only way to teach your brain that you’re capable of doing scary things. So go and share!

Taking the Stress Out of the Revise and Resubmit

Behind the Words: A New Interview Series

Are You Standing In Your Own Way?