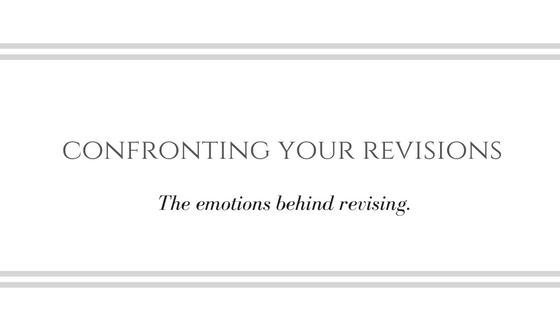 In an earlier post, I discussed how academic writers often end up giving short thrift to the revision process – at their own peril, I might add. Today I’m going to focus on why academic writers are hesitant to revise.

Our frustration with the revision process doesn’t only happen after the first draft. It appears at every step of the revision process. There are several reasons why writers resist revising. These reasons do not fall into discrete categories. Instead, they overlap and build on one another to make you feel like revisions are either an exercise in futility – because how can you *ever* write something worth reading – or proof that you really don’t know what you’re doing. If you’ve ever sat down to revise a manuscript, you’ve probably experienced some of what I describe below.

Perfectionism: You think you should get it right the first time. Revisions amount to admitting defeat. The irony here is that it might take multiple attempts to achieve perfection.

Fear/Intimidation: You’re scared to confront your own poorly written first drafts. It takes courage to admit you aren’t satisfied with your work.   We’ve all had the moment where we look back on something we wrote – something we might have thought was really good – only to cringe at how bad we now consider it to be. Nobody likes that feeling. We also have an emotional attachment to our writing and to our identity as academic writers. Addressing your own writing problems is kind of like calling your child ugly. You love your work, you’ve labored over your writing. Why would you relish the prospect of taking it apart and putting it back together in a different way?

I think this sense of fear or even dread at the thought of revising is most salient when we receive comments on submitted work. Whether those comments are from an advisor or a journal reviewer, we often demonstrate great resistance to hearing them or acknowledging them as legitimate. As Theresa MacPhail stated in her column for Vitae, reviewers’ comments “are often viewed with a fair amount of suspicion, fear, bitterness, or anger.” This fear is related to the sense of perfectionism discussed above – you’re fearful that all your hard work is for naught, or that you aren’t capable of writing well. You look at your early drafts – or even the later drafts on which you have received feedback – as proof of this suspicion.

Time: You don’t plan properly and thus can’t revise effectively. If you’re a deadline driven writer, you probably encounter this problem frequently. You may be time crunched because of the many other obligations you have, or because you don’t do a good job of estimating the length of various writing tasks. Either way, you end up rushing to revisions only to be disappointed with the results.

Exasperation: You get tired of reading your own stuff. You get annoyed at your writing and at yourself. You want to get it off your desk, even when you know it might not be ready. You’re probably also exasperated at reviewers’ comments, which you believe to be inadequate or unnecessarily harsh. This leads you to hurry your revisions or ignore criticism altogether.

Confusion: You may not know how to revise. This is an issue that is most likely prevalent for early career graduate students. You’re accustomed to writing very good college essays. Think of it this way: if you’re in a PhD program, you were probably an overachiever in college. You consistently received praise from your instructors, and they encouraged you to go to grad school. Even when you hand in course papers in graduate school, you receive mostly positive feedback and good grades. You then submit to a journal and receive scathing comments. You don’t know what do to, because you’ve never encountered something like this before. So your confusion is both emotional (why doesn’t this reviewer like my work!) and practical (how the heck do I get started on these revisions?).

Isolation: We rarely talk about the revision process. Sure, we might read articles about how to revise, the emotions behind revising, and so forth, but we rarely engage in conversations about the struggles we have with revising a manuscript. We may be in writing groups or have a friend who reads our work, but we don’t talk about how many drafts we’ve written, what we actually do when revising (are we just switching out some words? restructuring entire sections? introducing a different theoretical framework?), and what type of revision strategy works well for us.

There are myriad suggestions for how to revise manuscripts. The easiest solution I can give you right now is this: talk to your peers. Everyone has a story about the awful reviewer, everyone has written multiple drafts of their manuscripts, and everyone has encountered a situation where they had to completely transform a manuscript. Everyone’s felt self-doubt. Most of what I described above has one thing in common – it’s driven by the solitary nature of writing. You feel like you are alone and you are the only person who is struggling. It’s simply not true.

Also, think of your writing as a process or a practice, where you will improve over time but also, inevitably, have bad days. Having a bad day doesn’t make you a bad writer.